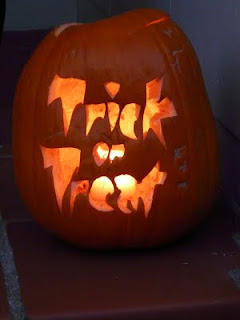 As I am writing this, right this minute, it is Halloween Night! Bwahahahaha! AAAAAAACK!
My neighbor across the street did a major haunted house deal with smoke machines and skulls and scary music, the works. So I went out and bought extra candy to accommodate the extra trick or treaters, and you know what? They are skipping my house to go across the street and check out the haunted house! Can you believe that? They'll be back, OH YES, they'll be back...
I have been feeling nostalgic for the Hallows-ween of my youth, one hundred thousand years ago, when 99% of the costumes were homemade, and 99% of us went as ghosts, witches, hobos, gypsies, and cats. We would watch Its the Great Pumpkin, Charlie Brown! once, we would dress up once, for halloween itself, my mom would put a little make up on me, give me a black mole, and my dad would take us out trick-or-treating, and ask after every house, "did you say thank you?" Most of the houses did not decorate, and if they did it was a cardboard cutout of a scarecrow. Or maybe that was just my house. There was one house that had a couple of tiki torches going up the stairs and I would not go to their door for any amount of candy, or even a full sized snickers.
We did not collect for Unicef. Halloween was for kids, and was not a teachable moment for anything but avoiding apples with razor blades. Neighbors who you knew actually made home made treats like popcorn balls, and, I don't know about you, but I trick-or-treated with one other friend and that was it. No one went out to eat, no one with little kids went to a party and left their house dark, and I got to eat as much of my candy as I wanted or ration it out to myself, it was my choice. And if I ever became constipated, my mom would rub my back while I sat on the can and tell me it was from eating too much candy, whether it was Halloween or not, and I thought that was true until my twenties.
But, alas, things have changed. A lot of the costumes are store bought (although I have to admit I am seeing some fine examples of mother-sewing at my door tonight) and the kids come to the door in clumps of five or more, and half of them don't say trick or treat. I have to make them say it in exchange for the goods. Two separate kids have actually asked me, "How many pieces?" instead of trick-or-treat and thank you; my response was, "How about no pieces, would that work for you?" I don't ask for much, just that they do their part by saying the magic Halloween words, and I'll load 'em up.
My friend is giving out granola bars. Jeez. Honestly. I beseeched her to please, please just give out the good stuff for once in her life. Don't be the raisin lady, or the granola bar lady, or the toothbrush or spare change lady. Buy a bag of mini snickers, have a sip or two of wine and get it over with. I called her tonight, and she's not even home which means that innocent little children, with store bought costumes and Unicef boxes have to climb the stairs to her front door only to find a bowl of granola bars, for chrisakes. 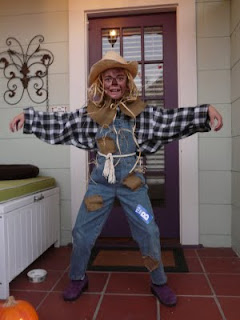 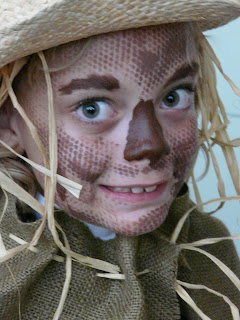 I have to admit, I bought 2 bags of the fun-sized chewy granola bars decorated with sprinkles, and put those out along with the little tubs of play-doh. They're both gone, while the reese's cups and mini hersheys bars (I always loved those) are still in the bowl. I wish I could write like you so I could tell the story of our H1N1 Halloween and how we are basically lepers among our whole community so had to go hang out with the only other kids we know who have had H1N1... Glad L had a great time and a great costume!!

I will have you know that Karen saved the day. Of course she did--she is a garbage-a-holic. I came home from work and she was handing out Reces cups, the carmel twist candies (?) and Heath bars--fistfulls at a time!
I thought it would be good to give out EmergenC next year.
Leila looks great!

Thank God for Karen. I knew she'd come through for me.