I just had a mani-pedi (kind of a new thing for me) and my jeans are falling down but I don't want to yank them up for fear of destroying my nice, freshly painted nails.  So I'm sitting here at my desk with complete plumber-butt.  I'll hoist them back into position when I go to the school for Variety Show rehearsal.

Ah, the Variety Show.  Or, as I like to call it, The Nightmare that Wont Go Away. People, this thing is so much freakin' work, and I have five other people doing this with me!  You know what freaks me out most?  Its that there are other events at this school that are organized by volunteers, that are ten times the amount of work of the Variety Show.  I just don't understand how these moms (mostly moms) manage to do all that they do.  I had a dad, who is a reader (you know who you are SS) ask me, "How do you do it?"  and there is a really easy answer: "I don't." My house looks like a tornado hit it, no one in my family has had a home cooked meal in weeks, my dog keeps giving me looks that say, "You used to love me." and I am falling into a deep sleep well before my husband even comes to bed which I don't think has ever happened in our entire marriage.

On that note, I fell asleep before him the other day, and he took my iPhone and recorded me snoring.  Can you believe that?  He says I told him to do it, but who can tell; I'm only half paying attention to our conversations these days.  So, now that I'm 40, I am definitely losing my short-term memory (as people told me I would,) when I need to go pee, I need to go RIGHT AWAY, and I snore.

Every day is just better and better.  What were we talking about?
Posted by Bored Housewife at 2:06 PM No comments:

Can I just Say

I know you've probably had enough Oprah out of me, that you're all Oprahed out, but can I just say how much I am totally enjoying her whole Australia thing?  I've watched all four days of it, and a) I want to go to Australia more than I want to go anywhere else in the world, b) I want to go with Oprah - actually scratch that, I want to go as Oprah; that woman knows how to travel. And c) I want to make a bunch of Australian friends.  So if you're an Australian and you're in Australia, please leave me a comment and invite me to your house.

Oprah is eating a vegemite sandwich on my TV right now, and she likes it.  The crowd is going crazy.  Next is Nicole Kidman and her husband and their whole big bag of BS.

Honestly, I've been so busy lately, so many irons in the fire, going in so many different directions, I haven't had time to notice anything much less write about anything.  (Except, of course, Wiener Man from the other day, which is how we are referring to him now.) Oprah is the only thing that is keeping me going right now.  Her and the nilla wafers.

Have a good weekend!
Posted by Bored Housewife at 5:17 PM 5 comments:

I Simply do Not Have Time for Sidewalk Masturbators

That title should say it all, shouldn't it? No?  Okay here's more!

I was having a really busy day, trying to get a bunch of stuff done and this was not how I thought my afternoon would go.  I was standing on the street today talking to my friend (who I already knew is hot, but I had no idea how hot) and she suddenly gasped and when I looked up, there was a guy with his junk out of his pants, fondling himself.

I've seen this guy before, for years actually, and assumed that he was developmentally disabled, so I didn't think too much of it, but I called the police anyway and officers came to the scene.  Turns out, not disabled.  I had to ID him on the street from the back of a patrol car, and, since I was the one who witnessed his little escapade, I had to decide whether or not he should get arrested, which I did, and he was.  I actually hesitated for a minute, but then I came to my senses.  There are kids in this neighborhood, y'know?

I thought they would track him down, and tell his caretaker to keep a closer eye on him and his junk, but instead, he's in jail this afternoon.

Now I need a glass of wine.  I wasn't at all rattled at the sight of his pee pee, but having police in your house, riding in the back of a police car, and knowing that you got someone arrested, someone who knows where you live, is enough to cause a nervous tummy.

The funniest part was that a good friend drove by while I was talking to the officers outside my house and put her thumb and pinky to her ear and lips and mouthed the words, "Call me!"
Posted by Bored Housewife at 7:41 AM 1 comment: 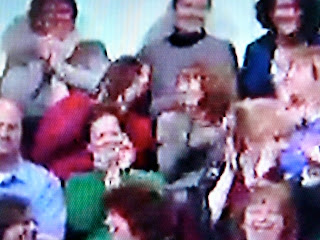 That's me right there, leaning over to tell E.  that I need a Container Store gift card
like I need a hole in the head.
My moment of glory, over in about half a second.
Totally worth it, though.  Totally.
Posted by Bored Housewife at 10:54 AM 1 comment:

Readers, I am one stressed out little schnauzer right now.  And you want to know the totally lame part?  I am stressed out by things I don't really have to do.  I have a part time job that I thought I would need when Rob's employment was precarious last summer, but its not precarious anymore and I don't need the job, but now I'm in it and committed, and its stressing me out today.  Then there's the Variety Show, which isn't really stressful right now, but just adds to the ever growing pile of crap in my brain.

I made a note the other day to do a blog post about animal management and nose picking.  I can't for the life of me remember what I was going to tell you about nose picking.  That you should do it?  That you shouldn't?  That we should all do it in unison?  I have no idea.  The animal management topic I can put off because what I really want to tell you about is:  OPRAH

The show that I went to in November is airing this Thursday, the 13th.  Get your DVRs ready!!  If you want to try to find me in the audience (not that I will be visible, I was behind the camera man the whole time) I am wearing a bright pink sweater (thinking that was a great idea, but a lot of people wear that color thinking the same thing) and I am...  how do I explain to you where I am?  If you imagine the studio seating as the lower two thirds of a clock face, I am at 8:30, in the upper section, in the second row, two seats in from where the guests come in (not the guests on my show, they came in from back stage, but a lot of guests come in this way.)  When I watch it, and if I'm visible, I'll let you know exactly the moment you can see me.

Because I know you are just at the edge of your seat...
Posted by Bored Housewife at 2:11 PM No comments:

I don't even know where to start.  Really, I don't.  Do I start with Christmas?  Too long ago.  New Years? Nice but uneventful.  Variety Show?  Maybe there.  That's what has been taking up all my precious blogging time.  I have come to realize that all the chaos of this show is inside of me and no where else, because everything is organized and running smoothly and ahead of schedule.  So, there's not really that much to talk about there, either.  Except that Leila told me she had changed her mind and didn't want to do it anymore.  I almost knocked her block off.  If I have to do it, she has to do it, because I'm the mom and I say so.  Doesn't want to do it anymore... Jesus.

Here's a funny thing about the Variety Show.  I recorded all these new shows on Oprah's new network OWN (you know Oprah, my best friend, whose free boots I ordered today) and I watched Season 25 last night (the behind the scenes look at what goes in to producing her show.)  While I was falling asleep, I had this new excitement about the Variety Show because I was fancying myself as a big time producer.  I envisioned wearing bifocals and a mic on my head that leads to nowhere, just so I can look official.  I'll throw up if I wear my glasses during the show (and what a show that would be) and, even though being totally dorky in private (or just in front of you guys) is totally okay, I don't think I can pull of a head-mic-thing-attached-to-nothing without showing my dorkiness to the whole gymnasium full of parents.  I think I'll have to stick to a clip board.  I actually bought a new one today.  A nice, shiny clip board.  Hm.  I'm the tiniest bit ashamed right now...

Other than that, my home has been completely neglected, or, rather, more neglected than usual.  We're doing our annual pantry eating this month; What's for dinner?  Whatever that mystery thing wrapped in foil in the freezer is, that's what we're having!
Posted by Bored Housewife at 3:10 PM No comments: