Okay, this will serve as my own personal journal entry on the Oprah experience, so its going to be a long one.  Get comfortable.

I flew to Chicago on Wednesday, checked in to the hotel, went to grab a bite with my friends, had one glass of wine, nibbled the edge of an ambien and tried to go to sleep.  No dice.  First lesson for anyone attending the Oprah show from the west coast: get to Chicago two days before the taping, spend your first day sight seeing and getting a mani pedi, get a good night's sleep and go to the show the second day. 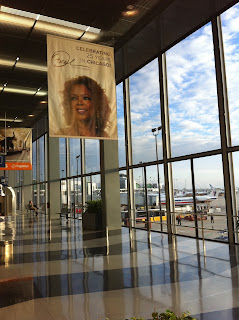 We were instructed to be at the studio at 7 a.m. so we got up at quarter of 6 Chicago time (quarter to 4 California time!) and got all Oprahed up.  I put on my new Oprah boots, and we took a cab to the studio.  It was still dark out. 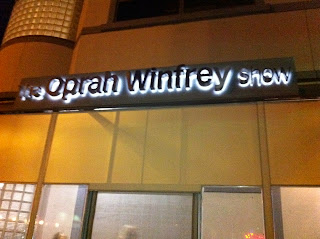 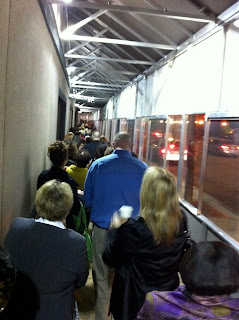 We got there and the line was already all the way down the building in a tented line area.  Second lesson for anyone attending the Oprah show: get there earlier than they tell you to.  You get a numbered release form as you go in, and you are sent into the studio according to your number, like boarding a plane.  The higher the number, the fewer seat choices you have.  But, the studio was smaller than I expected, and there isn't a bad seat in the place.  We were lucky because even though we were the second to last group to be called down, we were on the side of the studio that The Great One was facing, so we weren't looking at the back of her head the whole time.

But backing up for a second: Once you are in the building and have received your release form, you go through security.  They check your purse and put you through a metal detector.  They take your phone and camera, and they seem to take any pieces of paper in your purse.  They took all my business cards, and I saw them taking notebooks and things like that.  I assume its because people throw stuff on stage.  The person who made the reservation (in this case, my friend, G) is in charge of the claim tickets, and everything they confiscate from your party goes into one big ziploc bag.

Then you go up a flight of stairs to a holding area where you fill out your release form, allowing them to own your image forever and ever amen, and then we were asked to fill out a fitness and diet survey from Bob Greene.

Bob Greene, I'm pretty sure, is Oprah's personal trainer, fitness guru guy.  He writes books and stuff.  Now, I don't want to appear ungrateful, but I thought to myself, If I have to sit through an hour of Bob Greene talk about weight loss and fitness, I don't know how I'll stay awake.  You all know how I feel about this stuff: there's not a lot about weight loss and fitness that I don't understand, and I really don't want to talk about it.  Also, I was so freakin' tired.

I wish I had been wearing a watch, but I wasn't so I don't really know how long we were in that holding area.  A half hour maybe?  Then the people in charge start sending us back down stairs to the studio in groups of 50, according to the number on our release form.  For the purposes of posterity, let me just say that I was number 251.  We went down to the studio, found four seats together, and waited.  One thing you don't realize is that, even though they've confiscated a lot of the stuff in your bag, you still have your bag.  So the next time you watch Oprah, just know that all those ladies have their purse under their seat.

Then the fluffer lady comes out, and she's the one who gets the crowd going.  She's the one who asks where everyone is from, and says happy birthday to people, and answers some questions and all that stuff.  Then she gets a signal from someone saying Oprah is on her way, so she leaves the stage, and then, without any fanfare or "Ladies and Gentlemen!", carrying her high heels in her hand, comes

To be continued...
Posted by Bored Housewife at 7:30 AM