Now, here's the stuff you really want to know:

We got the straight haired Oprah, rather than the curly haired Oprah, and I will tell you that she looks just like Oprah.  No taller or shorter, no bigger or smaller, she looks just like the Oprah you see every day on your TV. So she walks out and kind of waves and sits down in her interview seat, and then someone comes out and puts her shoes on for her, and then someone comes out and adjusts her sweater, and then her make up guy comes out and touches up her make up.  Then she made a joke about how when you're as rich as she is, no one will let you do anything for yourself.

Here's the interesting thing:  I realized that the show is not done for the studio audience.  We are a prop.  Which is not to say that it wasn't super cool and something that I will remember forever, but she and her guests are mic'd up for the camera, not the audience, and Oprah comes out, does her show like a smooth pro, hangs with the audience for a few minutes, and leaves the stage to go on with her day.

So here it is:  Mercifully it was not Bob Greene for an hour.  Our show will air in January, and is a sort of New Year's resolution thing.  We had Dr. Oz for a segment on the five numbers you should know (blood pressure, cholesterol, waist measurement, weight, and I forget the other one) and he did a whole demo with a big blood vessel.  Then came Bob Greene talking about his five steps toward weight loss and his new book.  Honestly, I don't know what he said because I really did almost fall asleep, I was so tired.  When he left the stage we all thought, Don't we get a free copy of his book?

Then Peter Walsh, the organizing guru did a segment on de-cluttering your life, and shilled his new book, which we also didn't get a copy of, but Oprah said that everyone in the audience was getting a $100 gift card to the Container Store!  This was awesome, but also ironic since I worked at the Container Store for eighteen months and my whole house looks like a Container Store catalog.  Then came Adam Glassman, the O creative director who also does a style column in the magazine.  He came out with some models showing off new looks for fall.  Then Oprah talked about her new iPhone app, then she said, in her Oprah way, "Everyone here is going home with all this stuff!"  We all went nuts, partially because it was a bunch of free stuff, and partially because it was our job and we were all super excited to be there.

So here is what I got:


Bootights: a combo of tights and socks to be worn under boots.

A Chickie: an undergarment that you attach to your bra so your boobs
don't fall out when you're wearing low-cut stuff.
Perfect for the stacked, like myself. 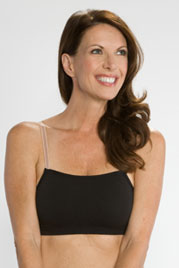 The Shirt, a button down shirt with cool double buttoning so, again, your boobs don't fall out 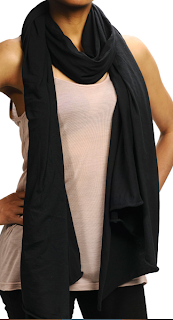 The Side Slope Parka from Eddie Bauer
that I took a picture of in the Eddie Bauer store on Michigan Ave: 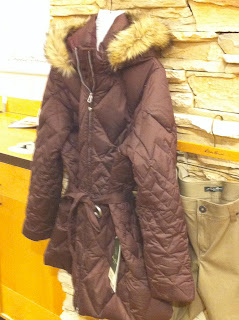 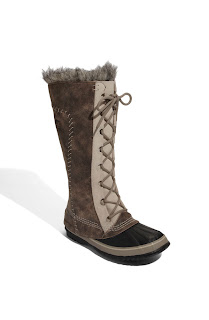 I had always wondered how they give away clothing items on the Oprah show.  I wondered if the audience had to go to some big room and try a bunch of stuff on, or if they ran out of sizes or whatever, so if you've wondered the same thing (or even if you haven't) here is the answer:  As you leave the building, you are handed a gift bag.  In our case, the bag contained the scarf (love it) and a big envelope with gift cards and vouchers.  Some of the vouchers have to be mailed in advance, some things can't be ordered until January, some take weeks to ship, but who's complaining?  Not me!  We got an Eddie Bauer gift card that we don't have to use for the parka, and I could do some good Christmas shopping with it, but, dammit, I'm getting that Oprah parka!  The women who were there with their husbands get double the stuff because the men get everything the women get.  So now you know.

It looked like Oprah had it easy that day because she came out casually, sat down, read off a tiny teleprompter like it was no thing and let the guests do the rest.  The guests really have to be on their game.  They have no teleprompter or cue cards, they have to know what they're going to say and how long they have to say it.  Then the audience claps and they leave the stage and don't come back out.

When the taping was done, and the models and the last guest were gone, Oprah hung with the audience for a few minutes, answering some questions.  There was one woman in the audience who wouldn't shut up and just wanted everyone to know that she was in some small way connected to Oprah by talking about some animal shelter, and then another woman raised her hand and asked if she could get a picture with Oprah.  Oprah said, "Since you were bold enough to ask, come on down here."  Then every hand shot up, but she only took the one picture.  Oh yeah, there's an official photographer there throughout the whole show taking pictures or her and her guests.

Then she said a really nice thing that I'm sure she says to all audiences, and I wish I could remember exactly how she said it.  She was all, "I know how much shopping, and manicuring and traveling and hair perming and hair straightening went in to you all being here today, and you've made us successful for 25 years and we really appreciate all the effort you've made to be here with us." or something like that, and then she said bye and left the stage.

It went so fast!  The whole taping was an hour tops.  Then the fluffer lady came back out and gave us all the info on the gift cards and vouchers and stuff, and then we were ushered out of the studio, handed our gift bags and we were out on the street.  We were freezing, because only the person who made the reservations can get all the checked coats and phones and stuff, but we didn't care, we'd just seen Oprah!  We put our new scarves on, and went across the street to the Oprah store! 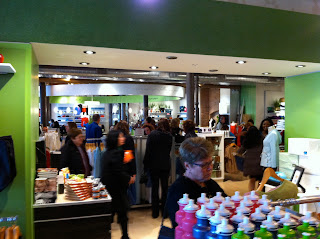 I went a little nuts in the Oprah store, and came home with a lot of souvenirs for friends and for myself that I now regret.  I'm not sure how many people want an Oprah Christmas ornament on their tree, but you're welcome!  I got one box of Oprah note cards, and I wish I'd gotten a bunch of those.  There is a section of the store called Oprah's Closet... 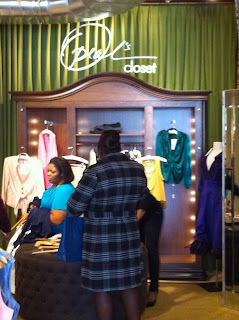 where she sells clothes that she's worn before.  I almost bought a sweater, but then decided to stick with all the Oprah logo crap that was piled in my basket.
Then we went to lunch and looked through all our vouchers and added up the value of everything and the number was over $650!  That was more than my plane ticket!  Then the server brought us this huge thing of cotton candy.  It was awesome. 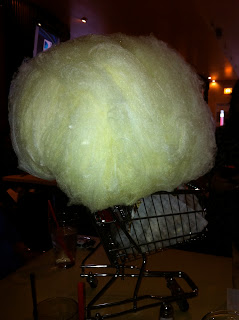 We had so much fun, and it was such a once-in-a-lifetime thing.  The free stuff was nice, but it would have been great without it, too.  So I suggest you go to her website and try to get tickets for yourself and some friends.  Its totally worth it!

Chicago was fun also.  The people are really nice, and they all want to send you to their favorite steak house! 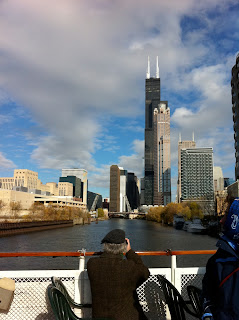 So: after all that, any questions?

Posted by Bored Housewife at 7:30 AM