Leila told me this morning that she wanted to go shoe shopping after school.  This is significant because you have never met a little girl who is less particular about what she wears.  Every now and then she gets a wild hair up her ass about a certain skirt or something, but I pick out what she will wear every day, and lay it out on her bed.  When I ask her to do it herself, she puts on the same purple dress that is too small and looks like a nightgown.  I am sick to death of that dress, but Leila seems to be too lazy to put on anything that requires more than two steps: Step 1) put on underpants. Step 2) put on dress.  Done.  Shoes are for wimps.

She decided she wanted new shoes, and after going through all her shoes and noticing that she's grown out of most of them, I agreed.  We took grandma and her checkbook along, and went shopping.  Skip to the part where we've been to five stores, and have found nothing that Leila likes, or that fits, or that is the right color. The girl is walking back to the car, crying.  This was not the crying of a spoiled brat, though.  This was the crying of a little girl who was heart broken about not finding any shoes, was tired and thirsty and just wanted to go home.  I totally sympathized with her.  This describes almost every shoe shopping trip I've ever been on, which is why I wear flip flops every day.

I talked her in to making one more stop.  Nordstrom.  In the meantime, she decided she didn't't want "school" shoes anymore, she wants boots; knee high brown or black boots.  This is not exactly what grandma and I had in mind, but we were both so relieved when she found a pair of black boots, in her size, that fit, and didn't cost a year of college, that we bought them.   Now everyone is happy, even though I still think she needs "school" shoes.

Nordstrom was like an oasis after all those other crappy stores.  No one helps you with the shoes at those places, and there isn't even a place to sit down and try them on, let alone someone to measure your feet.  Leila was sitting on the floor wedged between two racks of clothes, trying on boots that were attached to eachother with a rubber band!  The Macy's doesn't even sell kids shoes.  What is wrong with the world today?  How about, Don't sell shoes if you don't have a place to sit down and try them on?  How about, Shoes made of plastic are not allowed to cost $85?  How about that?  Honestly.

So her first foray into self initiated shoe shopping ended happily, but some hard lessons were learned.  Shoe shopping sucks, and that's all there is to it.  When we got home she said, "I think I'm getting a mybrain headache..." 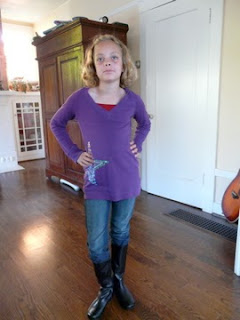 Posted by Bored Housewife at 4:56 PM

Labels: Parenting, Things my kid does