Am I a Douche Bag?

This is what happened tonight.  I think I should feel like a douche bag about it, but I don't.

Leila borrowed what's called a Newton's Cradle from a friend today.  It is supposed to look like this: 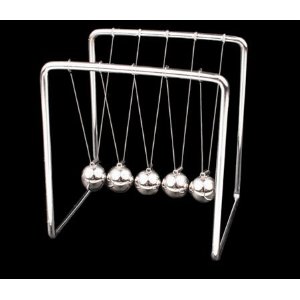 Kids seem to like to borrow crap from each other.  Before we left her friend's house, the thing got all tangled up, and I diligently and calmly untangled it.  So far, not a douche bag.  When we left, Leila forgot it on the table and I thought, oh good, she forgot about that thing.  One less piece of crap in my house.  Then she remembered, and ran back in and got it.  Shit.

So, of course, what happens next is that she effs around with it in the back of the car, and it gets all tangled up again.  Let me also add here that I don't feel very well, I have very limited patience, most of which has been used to untangle this stupid thing the first time, and the rest wandering around Joanne's fabrics looking for something that I don't even know the name of, to finish off her black widow costume.

We get home, and I am sitting at my desk trying to get the thing untangled.  I have pulled over my touch light so I can see better, but my hand keeps hitting the light and turning it off.  Then as I'm working, the whole shebang falls off the desk and any progress I have made is reversed and the thing looks like hell again.  Cue the boiling blood.  I am trying to tell Leila that she shouldn't borrow stuff like this.  That she should look at something cool in someone's house, and leave it where it is.  That when you borrow something, you are responsible for it, and I really don't feel like having to be responsible for other kids' crap.  Cue the impulse to throw the wretched thing across the room.

Finally, I give up.  It now looks like this: 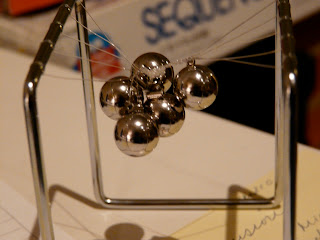 Its either the Newton's Cradle or what's left of my sanity, and I choose me.  I tell Leila that she will just have to buy her friend a new one.  Now Leila is crying and saying I should never touch things like this!  I'm so horrible!  I hate myself!  Now here come the douchey part, but I still don't feel that douchey about it.  I say to her, "Don't say another word like that, because I don't have the energy or patience to make you feel better about yourself right now."

So she goes into her room to lick her wounds and do what she always does when I'm the meanest mom in the world: make a sign that says KEEP OUT!  with red marker.  That's how I know she really means it.  Then I make her come back out and feed the animals and have dinner, and while she's eating I try to lighten things up by lecturing her again, but in a funnier way, about how people's crap should just stay in there own house, and her crap should stay in our house, and that everyone should just hang on to their own crap and not borrow anyone else' crap.  At first she's laughing, but then she starts crying again, and accuses me of calling all her stuff crap.  Well, most of her stuff is crap, especially that Shaggy figurine from her Scooby Do action figure set that I had to glue the arm back on today, but I go on to explain that I am crabby enough that I am just swapping the word crap for the word stuff and she shouldn't take it personally.

Now she's reading on the couch, and I just realized I haven't had any wine!

So am I douche bag or not?  I think not.  I think its good for kids to see the whole spectrum of human emotion, and boy did I put on a show for her tonight...
Posted by Bored Housewife at 7:20 AM

Def not a douche! I agree, it's OK for your kids to see that you're human, and nothing you did was mean or abusive, just true and honest.

Sometimes you have to let kids get a glimpse of the real world! It's not always sugar and spice is it?