I have a bone to pick. Swine flu hysteria is sweeping the nation, and its pissing me off. I know no one wants to get sick, I get it. I get it probably better than anyone. And I know its hitting kids more than adults because they don't have antibodies to fight it. Swine flu is not new, its been around a while, so older people have already had it and wont get it again. And I understand that the flu has broken out prior to the vaccine being available, and everyone is freaking out. But here's the thing: Its a flu. Flu is always dangerous to a certain segment of the population, and sometimes some people get sicker than other people, and no one knows why. No one can explain why most people who are getting the flu have mild flu-like symptoms, but some are getting super duper sick and ending up in the hospital. I almost died from what started as a simple strep infection, for chrissakes, and to this day no one can explain to me why, just as no one can explain to me why I was felled by another strep infection from a variety of strep that all of us have all the time, but is normally asymptomatic. Its a mystery!
If you're sick from the flu and it sucks and you're miserable, I feel for you, I really do. Being sick in bed, especially when you have kids around and your husband goes to work regardless of your needs, is awful. But barring any unforeseen and random haywire super flu bug that lands you in the hospital, you'll be okay. Your kids will be okay. Its a flu. It sucks. You'll get over it. My family once had something that will always be known as Sick February, a three-week period a few years ago where all three of us had something terrible. We were all puking and dehydrated, and had fevers and aches and pains, and it SUCKED. I was so sick, that when Leila went into the back bathroom (where we keep the cat box) to throw up, I went in there to rub her back and noticed she was kneeling on cat litter with bare knees. Mother of the year! It was the first time Leila ever had diarrhea, and I had to try not to laugh at her on the toilet: she just kept yelling, "Its so STINKY!!!" I asked her if given a choice between diarrhea and puking what she would prefer, and she reluctantly chose diarrhea. Wouldn't you?
Am I being overly harsh? Maybe. Maybe I'll get angry comments, but I just can't seem to get worked up about this. I have only gotten two flu shots in my life, and only because they were available at my workplace and I wanted other people to get them so I had to, too. If I have access to a swine flu vaccine, I'll probably get one because I have asthma and a history of mutant angry bugs that want to kill me. We may have actually had swine flu last week; Leila had all the symptoms, but it honestly didn't occur to me that it might be the dreaded H1N1.
So, get your vaccines, stock up on Tamiflu, do whatever you need to do to feel secure. I'm just gonna chill. Boy, wont I be eating my hat if I come down with the flu...
In other news, I'm getting on a germ infested plane tomorrow for my extended birthday weekend with my BFFS in Seattle Washington. If you're a reader from that area and are dying to meet me, let me know, I'll try to squeeze you in to my party-my-ass-off-eat-and-drink-too-much weekend. You know what they have up there in Seattle? Rain!!! La la LA! I'll try to post from there, but it might mean putting down my wine.
Oh, and also, I had two requests for pictures of the sofa, so here you go. The rest of the room is not finished yet, so don't judge me. 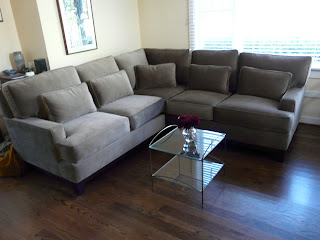 Posted by Bored Housewife at 2:48 PM

Labels: Illness, The Cool Thing I did Today

The fact that my advanced age has provided me with some cool antibodies to the flu is the only positive aspect of aging I've found so far...

I choose diarrhea also. Anyday, over puking. Our house will forever remember this 3 week period as Sick Birthday Season (for mom and dad at least.) Hopefully we'll be well for the kiddo's!

I'm not worked up about Swine Flu either, and don't get me started about the unnecessary hysteria when your kid gets pink eye. Sheesh.

The couch is beautiful!

1. Love the couch.
2. You will not be able to put your wine down. If for no other reason--we have no end tables.
3. The Swine is really real and really not good. I will vaccinate you while you are here.
4. Cannot wait to see you!

I would love to meet you when you come to cloudy, gray Seattle. What is the best way to contact you. P.S. your couch is awesome!

41 kids have died from swine flu so far