I Give Thanks for Vampires 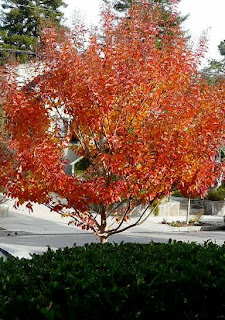 Today is Thanksgiving and instead of talking about giving thanks and eating and the stuffing I'm going to make (with pomegranate seeds!) I want to talk about... Vampires
Upon the recommendation of several friends, I am now reading Twilight, the first book. Never seen the movie(s) don't know a thing about it except that vampire mania is sweeping the nation and I am very, very behind. I started the book yesterday. I'm now on page 260. I read the first 236 pages yesterday, waiting, very patiently I thought, for a sex scene. I have now been informed that a) there is no sex until book four and b) I'm a dirty old woman for looking for a sex scene in a book written for the young adult market. I may have forgotten for a moment that I am not a young adult and this book was not necessarily written for me and my personal needs.
I want to say that this book is cheesy and bad and lame, and it is. For example, here is one of my favorite parts so far: "His voice was guarded. I noticed that he wore no jacket himself, just a light gray knit V-neck shirt with long sleeves." (here it comes) "Again, the fabric clung to his perfectly muscled chest. It was a colossal tribute to his face that it kept my eyes away from his body." And then there's no sex. So, yes, its lame, or, rather, perfect for the audience for which it was written, but the thing is, I'm on page 260, and I'm still reading it. I will probably finish it tomorrow (damn Thanksgiving is getting in the way of my finishing it today) and then I will want to read the next book, and the next, so I can finally - FINALLY! - get to the sex part. It better be a good pay off, too, with all the descriptions of high school biology class I've had to endure.
Rob asked me to give him a synopsis of what I'd read so far, so I told him it was a high school romance between a new-in-town girl and a beautiful boy who turns out to be a vampire, and there's a werewolf on the horizon somewhere. He said, "that's it?" Yeah, that's it. And no sex.
Also, I heard a review of the new Twilight movie on Fresh air and it cracked me up. Here's the transcript; "Then two werewolves fight over her. Then werewolves fight two vampires over her. Then a vampire fights a whole slew of other vampires over her. Then a lovesick vampire fights a lovesick werewolf over her. Bella saves Edward, Edward saves Bella, and the Native American werewolf Jacob, tries to save Bella from Edward. Jacob does make it a kinky triangle. Whereas Edward is an aesthete with white-marble skin and the highest brow in movies, Jacob is a dark and hairy biker dude with a very low brow and a trapezius the size of a watermelon." Awesome.
We are dog-sitting Mosely this weekend.
Here are Mose and Perry at the front door,
looking for vampires. 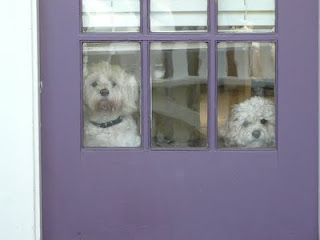 Posted by Bored Housewife at 10:37 AM

Labels: Holidays, Pets, The Cool Thing I did Today

cracks me up. I read the first one in under 24 hours and the rest each almost as quickly. They are ridiculous and stupid but yet you can't get enough. The movies don't live up the book - atleast Twilight didn't. I am seeing New Moon this weekend. Can't wait ;> !!

The book is painfully awful. I made it to the scene where he's glowing in the meadow and immediatly shut the book never to open it again. Awful.