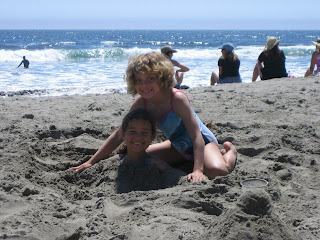 L and A playing in the sand 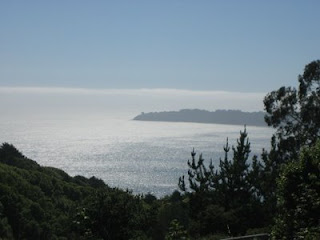 The beautiful Pacific, on the way to the beach
I really - REALLY- want to dish about my mother-in-law right now, but I promised myself that I would never write anything truly hurtful (except about Dyan Cannon) and that I would never write anything that I wouldn't say to someone's face. Damn me and my sense of right and wrong. I haven't actually seen my mother-in- law, or spoken with her, but I don't need to; she is that good. She can annoy me without actually doing anything at all. See, it gives her plausible deniability. She can say with total sincerity that she didn't do anything to me, be completely right, and I will still be up nights wanting to smack her. I've said too much. I should delete everything I've just written. The red devil on my shoulder is standing on the white angel's neck, though, and I can't do it. It looks to the uninitiated that I clearly have a problem, and anger addiction, but you don't know what I'm dealing with.
Also, I must have had a dream last night in which Rob was being a big jerk because I have felt this generalized hostility toward him all day. I called him an asshole on the phone today. I was explaining to him how I was going to send his prescription to the mail-in pharmacy instead of going to the local pharmacy because it would be cheaper, and all he had to say was "I stopped listening a few minutes ago and I have no idea what you're talking about." And that's when I called him an asshole. He laughed, I laughed, but I did want to kill him.
In other news... For those readers who do not live in California, I will now take the opportunity to rub in your face the fact that I packed a cooler, I drove to the beach with two little girls and a littler dog today. It was 85 degrees, with a little ocean breeze, I got a tan, and we had soft serve ice cream on the way home. Jealous? The girls had a ball digging holes, making piles of sand, digging for sand crabs and then completely freaking out when they found one. Aaaaaah. Days like this are why I shell out the big bucks to live where I do.
My neighbor, you know the twelve year-old who has started his first band? He's practicing right now. Its awesome. You haven't lived until you've heard a boy in the throws of puberty belting out Don't Stop Believin'. I met him when he was three, or so, and he's been singing his little heart out the whole time. He used to walk around and around his magnolia tree in the front yard singing London Bridge is Falling Down for hours. Rob and I used to open the window and turn off the TV just to listen. He is dedicated, and I think he will be famous some day, and I can say I knew him when. When he was channeling Steve Perry from his back yard.
Posted by Bored Housewife at 8:34 PM

Labels: about Bored Housewife, The Cool Thing I did Today