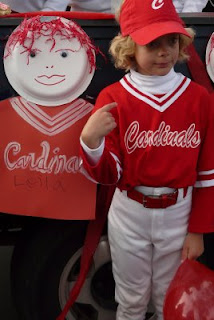 Its been a few days. I've been making myself really busy, running around, and I'm paying for it now. I guess I was just so excited to be feeling more normal, that I over did it. I've been go go go since the weekend before last, and on Monday of this week the curtain just came down hard. I went to bed before the kid last night. I slept from around 7:30 until 10, woke up when the man came to bed, watched The Office, and went back to sleep.
So, today, I am not doing anything that I don't want to do, and doing only things that are restful and restorative. Like writing this!
I had an appointment with a trainer at the gym last Friday. His name was AJ and he was sweet if a little dopey. He had two different-sized nostrils, and I'm sure he shaves his arms. I thought swimming might be his sport of choice, but he was a little bulky for that, and it turns out he plays baseball. Why would you have to shave your arms for baseball? Anyway, I don't think he really got it when I said I was recovering from an illness, or he was extremely optimistic for me. He showed me at least a dozen different machines and exercises, and kept saying "three sets of 12 of these." I didn't have the heart to laugh in his face. I think these exercises will be really good when I eventually go back there. I haven't been back since our meeting (see top paragraph.) They're all upper body weight training, and I probably look like a dork doing them. But bikini season is coming up, you know...
In the days prior to my adventures with AJ, also in preparation for bikini season, I finally finished the last of Rob's birthday cake. It was a struggle, but someone had to do it. We got a half sheet, and two-thirds were eaten at the party. I gave one hunk away to my neighbor, and pretty much at the rest all by myself. I would mostly just leave a fork in the box and swipe scoops of cake as I walked by, but sometimes I would actually cut a piece like a civilized person. Wanna hear something shameful? I let Leila have a little piece here or there, but I totally hoarded it for myself. When there was only a little bit left, I told her it was all gone so she wouldn't ask for any more. I either love cake that much, or I have a little problem. Probably the latter, given my penchant for stuffing myself. At the end, the cake part was gone, and there was just a pile of white icing, sweet enough to make you see spots, and I powered through it with a spoon. It was with a mixture of relief and triumph and sadness that I cleaned the last dregs off the cake plate with warm soapy water. No more cake until my birthday in November, but Rob has forgotten to get me cake on my birthday for the last two years, so it will probably be no more cake until Leila's birthday in January.
I also went to McDonalds again last week, but I ordered a meal deal instead of a mini meal and was so full and grossed out by my own self that I think that's the last McDonalds for a while. I should also add here, lest you think that all I eat is junk food, that I made a delicious pork roast with lots of veggies and it was very yummy. I've also had three salads in the last week... and two milkshakes. Have you ever noticed that the lumps of cookie dough in Ben and Jerry's Half Baked ice cream are a little chalky?
Enough with the menu. (Last word: I have a half a burrito in the fridge that I am really looking forward to. There.) We had our second softball game of the season on Saturday, and these Cardinals are looking good! One of the parents overheard some players on the opposing team say that the girls on our team looked small and that we only had seven players to their fourteen so they were sure to win, but I think we took them by surprise. The smaller they are, the more determined and coordinated they seem to be. The two smallest players on our team are easily the two best. They are in it to win it, and their jerseys go down past their knees. There is no score keeping, and the base coaches are pretty generous with the batters when it comes to outs, but these girls can play! Used to be they'd run the wrong way, they would run a loop around the pitcher's mound instead of touching the bases, they would sit in the dirt and draw little hearts with their fingers, etc. but a year has made a huge difference. Leila is doing well, she hits the pitches on her first or second swing and makes a good showing. I don't think she cares too much about winning, though, and her eyes are on the post-game snack, and getting to go to the playground after practice. We are in charge of snack this week and I plan on making some margaritas. For the parents, not the kids.
That's enough for now. I'll try to be more awake and on the ball the next time I write. Last night, Leila yelled, "What about me, people? What about my needs?" I just love that kid.
Posted by Bored Housewife at 8:47 AM

I am with Brynne-the white is easier on my eyes.
Go Cardinals.