Camping While Married: Pros and Cons

When Rob and I were house hunting a million years ago, the first thing he would look at, before the kitchen or bedrooms, was the crawl space and the attic and the garage.  It didn't matter that time was of the essence, and that if we didn't like the home part of the house, the crawl space was not going to be sell us on the house.  Maybe its a guy thing.  Or, maybe its a moron thing.

Some readers in the past have gotten on my case about publicly being mean to my husband.  Let me put your mind at ease by saying: A) He loves the attention.  B) The person who folds his underpants is allowed to be mean sometimes. And C) YOU DON'T KNOW WHAT I GO THROUGH.  Besides, I'm not mean; I'm just honest and, usually, I'm right.

So we went camping in the most beautiful place imaginable.  I even used a vault toilet, and it was totally worth it because  the place was so frickin' amazing.  We had heard about these Enchanted Pools that weren't on any map, and they were dangerously close to the desolation wilderness, but the ranger gave us "directions" with a wink and a nod, so we were on our way.  The kids' whining was totally bearable, the dog was trotting along like he owned the trail, but we had a hard time figuring out where to veer left and and find the Enchanted Pools.  Rob decides, in his infinite wisdom, that he is going to do what we have told the children not to do, what every good boy and girl scout knows not to do, and what anyone with little mountaineering experience would be out of their mind to do.  He goes off the main trail in search of the trail to Sacred Pools of Infinite Wisdom or whatever, climbing up craggly cliffs and over boulders and whatnot, and then... He's gone.  We were yelling for him, and he did not respond.  The children started to say stuff like, "Is he ever coming back?  Should we just leave?  What if he's dead?"  And I sat there thinking to myself, Okay: I'm a widow.  He's fallen of the cliff and is dead.  Or he's injured and he will have to be helicoptered out and will be in a wheel chair.  Or he's broken his leg and wont be able to make it off this mountain.  Or, he's stuck and he'll have to chew off his own arm.  All of these thoughts are going through my head, and finally, after what seemed like an eternity, our camping buddy who had gone on ahead to see if she could spy him from further up the trail yells down, "Rob's fine!  He's up here!" and I decided I had to go kill him.

I was so mad at that moron.  I made him address the children and say how wrong he was to have gone off the trail, and that without a buddy! and that he was sorry he made everyone worry and wait.  Then I made him my bitch for the rest of the camping trip.

But then, here is the killer thing about camping while married:   When you camp, the packing, unpacking, and packing up again is a bit of an ordeal.  What makes it fun is that you are outside, and you get to play with all the fun camping equipment that you've spent all your money on.  And lots of camping equipment folds down small and has stuff sacks and is fun to touch and utilize.  Rob and I have  a system: he packs everything inside the tent, including the tent, and I pack everything outside the tent.  This may seem like a raw deal for him, but we are done around the same time.  There are a lot of little things outside the tent that need to be cleaned and packed away, or folded up, or whatever, plus you have separate your stuff from your camping buddies' stuff.  Then he packs the top of the car, with its series of nets and bungees and stuff, and I pack the back of the car.  We are also done with these tasks at the same time.  The reason this is awesome is that it epitomizes marital team work.  We do a lot of high fiving afterward, and no one feels like they are stuck doing all the work.

Then we take a stroll down to The Vault (the toilet) and get in the car with our greasy hair, dirty dog and leftover camping snacks and head home.  This time, we agreed that neither one of us would sit down or shower until all the camping stuff was unpacked and put away.  There have been times when the camping stuff dangles around the house for WEEKS, but not this time, baby!  After three days in the wilderness,  that shower is a mighty motivator!  We worked our little butts off, emptying coolers, and unpacking duffles, and putting things away in the rafters of the garage.  Rob even vacuumed the car!  We did some more high fiving after we were done.

We love team work!  Except when one member of the team leaves the other member to wonder whether she is going to have to cash in a life insurance policy on the first member...


The cliff I though Rob had died on 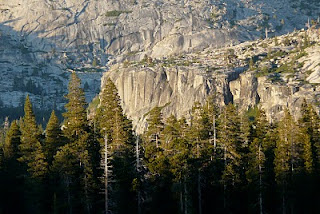 The Sacred Enchanted Pools of Infinite Magic and Childish Wonderment 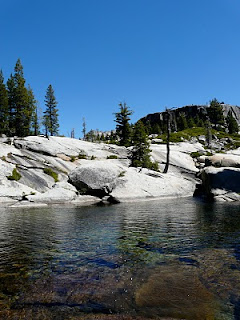 Posted by Bored Housewife at 1:19 PM