Where's Fabio when we Need Him?

Today is my blogoversary! One year ago, I started writing about how my house is a mess, my animals are annoying, and how I hate to make dinner, and I'm still writing about the same BS a year later. Who knew? So before I write another few paragraphs about what is annoying me on this fine Wednesday, I just want to thank a few people: Thanks to J. for telling me to write a blog in the first place, and not shutting down my decorating ideas yet. Thanks to all my white-pants PTA moms for letting me expose them for the wild, bawdy MILFs they really are. Thanks to my husband for never getting mad when I write about his bad breath or his nightly nose-strip. And thanks to my readers (and commenters!) you all make me feel like a big shot!
Here is the first blog post I ever wrote. Nothing much has changed except that Leila is now 7, and in second grade. My house is in about the same state it was in a year ago, I'm still hungry, the puppy is a degree or two calmer, and I have a new TV.
Lately, I have been thinking about romance. I stayed up way too late to watch the last hour of Pride and Prejudice with Keira Knightly, complete with underbite, and Matthew Macfayden, who is really more dashing than handsome. I don't really care about the first two thirds of the movie; I don't care who Mr. Bingley is, and you can keep all the dancing, and, frankly, you can kind of keep Keira Knightly, too. But then, in the last hour, there is Mr. Darcy. Mmmmmm. Again, he's really not that handsome. I mean, he doesn't make me want to puke or anything, but its more the look on his face; he's so in love with Elizabeth Bennet, and in that scene, in the rain, where she is all pissed off and says, through her underbite, that he is "the last man in the world that I could ever be prevailed upon to marry!" His face just falls, like he's taken a bullet. There are more scenes in which he's dashing, but, in the end, and this is what I stayed up late for (Rob says to me, Are you asleep? And I open my eyes and say No! I have to stay awake so I can watch Mr. Darcy walk across the grass in his long coat!) Miss Elizabeth is taking a pre-dawn walk on the moors or whatever the hell they call them, and when she looks over the horizon, she sees Mr. Darcy striding purposefully toward her, and the music swells, and he has on a white shirt and riding pants and boots and a long duster that looks like a cape from far away, and I am just breathless. And he professes his love for her - again - and in spite of the fact that she has too many teeth in her mouth - and they huddle together without kissing, and the sun comes up behind them, and that's where the movie should end. But, it doesn't. The rest of it is Keira Knightly weeping with joy and being a little annoying.
Here's the thing:
You know that stereotype of the middle aged housewife who reads harlequin romances and thinks Fabio is attractive? The one who watches soap operas and is surly toward her husband when he comes home from work because his name is, like, Bob, and he's an accountant with a paunch and an appendectomy scar instead of a gay actor named Chance or Zander with his shirt off, a trust fund and a "bad boy" reputation? You know what I'm talking about.
I think I may be becoming one of those women. I don't watch soap operas, and I don't read romance novels, and I think Fabio is a joke, but I think I might be starved for romance. And you know what the pisser of it is? Its an impossible itch to scratch! Unless you're young and freshly in love, or a character of fiction, its really a no-win situation. Romance boils down to your husband going to the corner store for a vanilla drumstick because you're really in the mood for ice cream. That's pretty good. Or taking out the recycling without being asked. That's not bad. But I think I just have to resign myself to the fact that movie romance is out of my reach, and I should just download Pride and Prejudice on iTunes and watch the last hour whenever I feel the need.
Ah, yeah, that's the stuff. 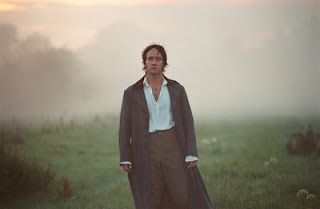 Now, its lunch time.
p.s. As a little bonus, mostly to myself, I wanted to post the best comment I've ever gotten. Thanks, AlwaysAllah!
"I am 24 years old and in the midst of planning a wedding and trying to figure out what I want to do with the rest of my life. I've always known I want to be a mom - and a stay at home mom at that! The problem has always been that I am not a terribly domesticated woman...I hate cleaning, picking up after myself and others and the thought of it exhausts me! I thought that meant I needed to be a career woman...but that really doesn't float my boat! After reading your blog it's made me realize that I CAN be a mom and stay home and not be a domestic goddess...it's okay! I think the time you put into the relationship with your daughter and husband is 100x more important than cleaning the pink stain on your bathtub. (I just got rid of mine this week too!)"
Posted by Bored Housewife at 11:07 AM

ok, I must confess, I spent today watching Twilight and falling in love with Edward. Therefore, I get you completely.

I should clarify - I am in love with Edwards lust/love for Bella.

Happy Blogoversary! We should have gone to lunch to celebrate. Oh well, there's always tomorrow...

Congratulations on your one year anniversary. I enjoy reading your postings - keep up the good work! And, at almost 54 years old, I'm still hoping for romance!