The Fair is a Veritable Smorgasbord 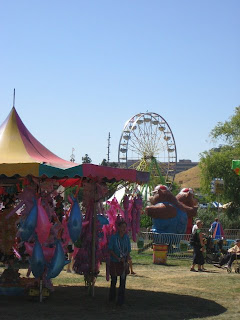 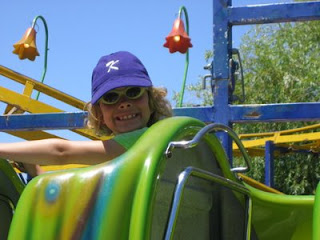 We went to the county fair today, all three of us. I am beat to shit, my friends. It is hard work to walk slowly in the summer sun for four hours, harder than you might think. I went on one ride, and found out I am too old to go on rides. The thing made one turn and I was ready to puke. Leila loves rides, and she's too big for the little kid rides she used to go on, so its all the hardcore spinny stuff. She went on this one called Cliff Hanger where you lay down on your stomach on this thing that looks like a hang glider and it flings you all over the place. I kept looking up at her, spinning through the air, and thinking, That's my little baby up there!!!
More important than any of the rides, here's what we ate:
Rob started with a corn dog, and a bag of carmel corn. I got some cotton candy and Leila had an ice cream cone. Then Rob and I each had an ear of roasted corn on the cob (so good!) Leila had a slice of cheese pizza, and Rob and I split a piece of pepperoni. I got a coke, Rob had an Arnold Palmer. Then we split a funnel cake with powdered sugar. We were still hungry, so after viewing the home arts show, the pig races and the 4H exhibits, I had some cajun fried shrimp with some french fries and Leila got a sno-cone which Rob ate. I think that's it for the food. It sounds like a lot, but really all I had was: one bite of corn dog, a few pieces of carmel corn, about a third of a bag of cotton candy (the rest is in my purse) an ear of corn (sugar free) half a piece of pepperoni pizza, one third of a funnel cake (less, actually, since Leila is such a hog) 6 battered and fried shrimp and, like, ten french fries, and half a bottle of coke. So I wasn't that piggy. Including admission, we spent about $100. Unbelievable.
The really unbelievable thing is that we're not done. We're at home now to take a little rest, let the dog out, cool off, and then we're going back to probably eat more food (and this time I want something of my own that I'm not sharing with anyone,) and watch the fireworks. Its a long day, but I love it. Worth every penny.
And now for a nap...
Posted by Bored Housewife at 5:18 PM

Labels: The Cool Thing I did Today

Anonymous said...
This comment has been removed by a blog administrator.
November 9, 2009 at 1:42 AM