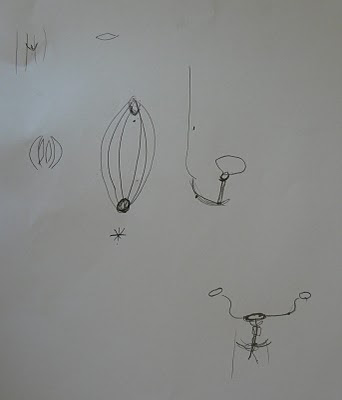 
She asked me if there was any way to avoid having a baby, and we dipped unexpectedly into a brief discussion about birth control. I didn't want to discuss anything that had to do with penises or sperm or anything, because she hadn't actually asked for that information, so I told her she could take a pill that would prevent her from having a baby. Then she completely stressed out because she can't take pills, not even chewables, she still has to take the liquid tylenol. I assured her that there would come a time when the fear of becoming pregnant would outweigh the fear of swallowing a pill, and that she didn't have to worry about it for a long time. A long LONG time.

So, there it was. The Talk. All my plans and scripts went right out the window, but it all worked out. My mom gave me a very brief explanation, like, its something you get once a month that means you can have a baby. Her mother had simply told her, Now you watch out for boys. I think the women in my family are getting better at this. I know what the next Talk will be, and I'd better start getting ready. How about, When a mommy and a daddy love each other very much, and they're married... Think it will work?
Posted by Bored Housewife at 7:30 AM