So I don't know if I've mentioned this, but I started a book club a few months ago called Trashy Book Club.  I was in a regular type book club, but the books were all so heavy and depressing, and I just couldn't bring myself to finish them, and I thought, Why the hell am I doing this?  I am irritable enough on a regular basis, why add to it?

Trashy book club is exactly what it sounds like:  After all those heavy books about abused women and immigrants and Native Americans, I just needed to read Rob Lowe's autobiography.  And some Jennifer Weiner.  And maybe the 100 Most Beautiful People issue of People.  There was this woman in the other regular book club who seemed to be the unofficial arbiter of the books we would read.  Someone would say, "How about the new David Sedaris?" and The Arbiter would say, "No." and that was just the end of the discussion.  There was no room for trash, so, dammit, I made room for trash. 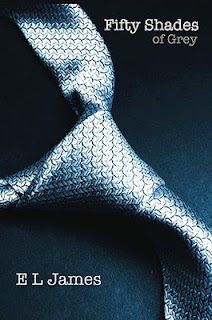 We just read Fifty Shades of Grey.  You may have heard of it.  People call it Mommy Porn.  I think that's an apt description.  If you've been under a rock and you haven't heard of it, here is my synopsis: Recent college grad meets uber-successful, rich, damaged, ravishing god-man who is so good in bed that no one in the free world can stand it.  He's also into bondage and stuff, but that's hardly the point.  She has the best sex anyone has ever had, ever, and we get to live vicariously through her as middle aged housewives who only wish that they would have met an uber-successful, rich, damaged, ravishing god-man who wants nothing more than to buy us clothes and cars and have sex with us, instead of the men we did meet and ultimately marry.  Not that this would not become annoying at a certain point, its fiction.  I keep thinking that these characters are in the first three weeks of their relationship; of course the sex is hot!  Call me in 15 years and let me know how its going!

I read a thing today about how this book is taking its toll on marriages, and I totally understand it.  I read this book, and then I looked at my husband, asleep with his is nose-strip on, and I thought, Really?  Poor Rob, he doesn't know what hit him.  I tried to get him to read the chapter where the girl loses her virginity to the guy, and he just laughed.  Oh well, can't blame an overweight middle aged woman for trying.

Here's the thing, though.  There are three of these books: I read the first one, which was pretty darn hot, then I read a "real" book, one that The Arbiter would have approved of, and now I'm reading the second book in the series.  I think I should have taken a bigger break; now when the characters have sex, I just look at my watch and see if a Friends rerun is on.  Maybe I'm not in the right frame of mind.  Maybe I need more wine.  Oooh, that's a good idea, more wine*.

I can't wait to talk about this book with my Trashy ladies later this week.  Its sure to be a barn burner.

*Remember in the last post where I was in my PJs drinking wine alone? Its the same night.  I'm on glass #3.  Its a good night.
Posted by Bored Housewife at 7:50 AM