I've told you about this book I read called Make the Bread, Buy the Butter.  In it, Tipsy Baker makes her own yogurt and it sounds so easy!  So, I wanted to try it.

That was the end of yogurt for me, I've never had yogurt again.  Except for frozen yogurt; that goes down easy.

Which brings me to why I wanted to make my own yogurt, even though I don't like yogurt: 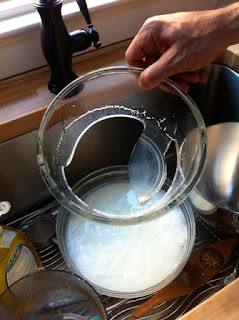 but I bet I still would have ended up with a bowl of milk in the morning.

In the meantime, if your reading this, Tipsy Baker, what did I do wrong?

P.S.  That is not my hand.  Contrary to your assumptions, I do not have hairy man hands.
Posted by Bored Housewife at 7:44 AM

Did you leave the oven on? It must be turned off or it will kill the bacteria and you will end up with a bowl of milk. You just want the oven a tiny bit toasty to encourage growth, not really hot. By the morning it should be room temperature.
Also, be sure the yogurt you start with contains live cultures (it says on the label.)