Next Year, Cake from a Box

Every year, I bake a cake for Rob's birthday. I like baking a cake for him on his birthday, once a year, even though he doesn't care all that much. I started this tradition with a triple layer carrot cake with maple cream cheese frosting. It was delicious. I bought three perfect cake pans just for that cake because I thought I would make the same thing every year, but then Rob got squirly. He asked for a German chocolate cake, which took all day, came out great, but I don't care for coconut, and we all know how I am when it comes to cake.

By and by, Leila took a cake decorating class and decided that she would make all the family cake decisions from then on, and, as kids are, she doesn't much care what kind of cake you want for your own birthday. (I have not given in to this. I want what I want, and no little kid is going to take my United Market cake from me.) What this normally means is that I bake the cake, color all the frosting and fill the pastry bags, clean everything, and do the crumb coat, and she comes along and does about five minutes worth of decorating, and moves on with her day. Then she tells everyone that she made the cake.

This year Rob wanted a red velvet cake. So far, we don't have a problem. So far, its all theoretical. I reviewed some online recipes and was not overly impressed, so I facebooked (which I'm sure is not a verb, but it will be soon) Tipsy Baker, who wrote that book I told you about, and in about one minute she facebooked me back a recipe - not a link, mind you, but a typed out recipe - for red velvet cake. First of all, how awesome is the internet? And how generous was it for Tipsy Baker to type in a whole recipe to a total stranger like me? I want to take that girl to lunch! Name the time and place, Tipsy Baker!

The recipe included two bottles (that's two ounces) of red food coloring. Remember how I told you not to pack your food coloring if you move? That was because one casualty of my move was a bottle of red food coloring that opened mid move, and made a complete mess of everything that was packed with it, and ended up leaving tiny stains on my brand new counter. Bastard.

Long story only slightly shorter, I was SO CAREFUL with the red food coloring. REALLY CAREFUL. And you know what happened? Red food coloring still splattered and now I have more little red stains on my brand new counters and some on my brand new matchstick blinds. In addition, I just bought some brand new dish towels at Williams Sonoma, and two of them now look like I tried to stop the bleeding of a gunshot victim. And this shit doesn't come out. I oxi cleaned them and everything. The first dish towel was my fault; why on earth didn't I hide it away and use an old rag? Such a dumb dumb. But the second ruined one is a mystery. I blame the kid.

We poured the batter in a shamrock-shaped cake pan, and baked the thing. I had buttered and floured the pan beforehand, I cooled the cake on a rack, and then the damn thing wouldn't come out of the pan. I submerged the bottom of the pan in warm water like the internet told me to; no movement. Eventually, the next day, half of it came out, and Leila coaxed out the other half.

We frosted it green. It was the ugliest damn cake you've ever seen in your whole life. I could not get over it looking like blood and guts, so I didn't even taste it, but Leila declared it to be delicious, and Rob ate it, and now the carcass is just sitting there, on my brand new counter, taunting me. You know how much I like cake, right? I mean, I like cake A LOT. But I just cannot touch that thing.

So, no more red velvet cake for me. No more red food coloring for me either. Now I'm going to go get some 220 sand paper and get those little red stains out of the counter. The dish towels will never recover, so I'm taking the money I would have spent on a cake at United Market, and spending it on another new set of dish towels. So there. 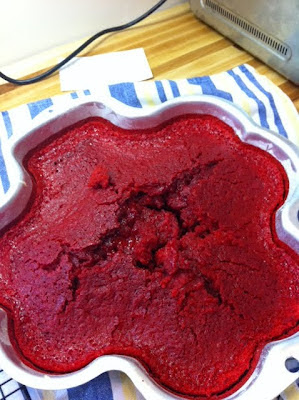 p.s. I still send my thanks to Tipsy Baker, though, not her fault I can't handle food coloring like an adult.
Posted by Bored Housewife at 11:54 AM

oh dear, well an artificially colored red cake is not for everyone. Yikes!

Oh, that pic made me laugh out loud!

My cakes look like that, but I have never did a blood red one before...I can't stop laughing!