Hanging Ten. Whatever that Means

I know, I know.  I was in Hawaii, and my re-entry has not been smooth, but I'll get to that another time.

Wanna know what I did in Hawaii?  I SURFED!  You read that correctly.  With my dead foot and my arthritic knee and my in-the-way boobs, I surfed.  I got up on the surfboard for about three whole seconds.  I sucked at it, and I have never worked so hard in my life, but I did it, and I was majorly stoked.  Rob was pretty good, Leila was pretty good, and I was terrible, but that's okay.  I had always wanted to try it, and now I have. 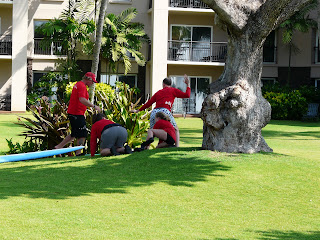 Again, my ass.  There are six more pics like this one.  This was also the best I looked surfing all day, even though I wasn't on a surf board or anywhere near the water. 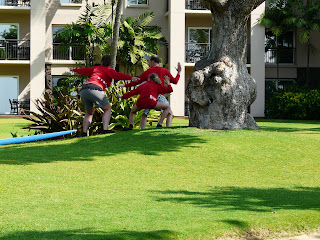 This is a hen with her chicks.  While this picture and the other one just like it was being taken, I was probably up on the surf board for those precious three seconds. 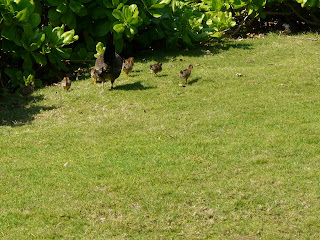 This is me kneeling on the surf board.  Behind the bushes. 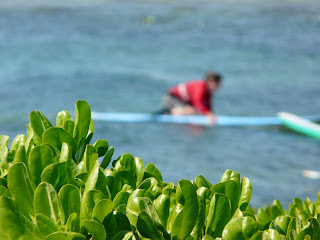 Best picture of Leila.  Its not a bad one, but she had some excellent runs, especially her last one.  My dad didn't photograph that one, though, because they got bored and left before the lesson was over. 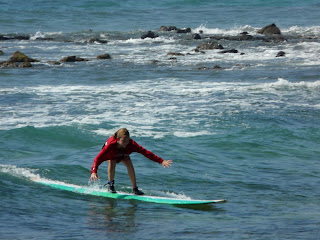 This is Saint Rob looking like a pro (except for that his wave is only one inch high) Of course my dad gets a catalog shot of Rob.  They like him so much better than me its obnoxious. 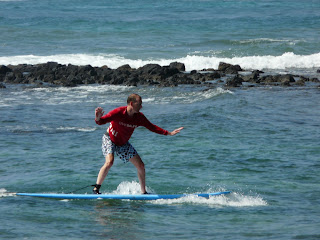 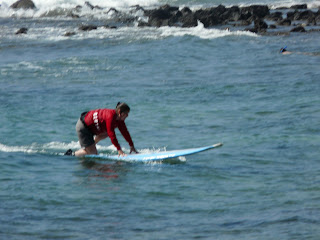 So there you have it.  Surfing.  Dude.  Moon Doggy.

I also paddle boarded, which looks much easier and more zen-like than surfing, but I assure you its not.  Not in the ocean anyway.  I went out on that thing and got up.  I looked like this 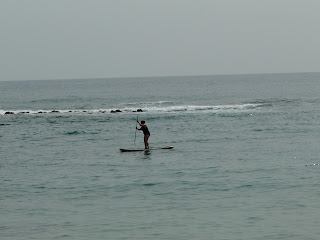 I popped up and held on to the paddle board while I was catching my breath, and saw Rob throw his glasses at some stranger on the shore and dive into the waves, swimming over to me like a shark was chasing him.  I asked a woman near me who was calmly paddle boarding around like it was no thing, "Does he think I'm drowning?"  By the time he got to me I was back up on the paddle board, not on my feet or anything fancy like that, and I was all, "What was that all about?"

It is nice to know that I am married to a man who will swim his little ass off to save his wife who is stranded with a paddle board out in the ocean.  So romantic.  Since he was out there anyway, I made him give me a ride back to shore.  Too much salt water up my nose to do any more paddle boarding: 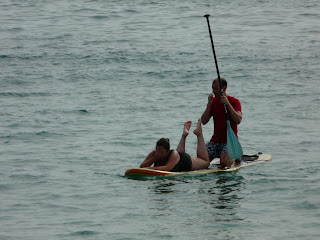 When I was back up on the beach, a man said to me, "Your husband tossed me his glasses before he went out to save you."  Its nice to be saved, I guess, but not when you don't need saving.  Then you just feel like a helpless girl.  Of course my parents were much more impressed by Rob's ability to swim than they were by my getting up on a paddle board.  There's no winning.

We also zip lined, which you should be very impressed with.  I was the first screamer, and I got 67 bug bites.  I don't need to do it again, but I'm glad I did it.

So, add to this story a few Mai Tais, Mimosas, Tequila Sunrises, a book, some podcasts, naps and food, and there you have the whole story of my trip to Hawaii.

Aloha and Mahalo.
Posted by Bored Housewife at 2:25 PM