Lost, and not Found

I spent two hours in a German police car with Officer Schultz (I'm not making that name up) and we looked everywhere for this suitcase.  I took away two things from this experience: 1) German officers are allowed to smoke in their police cars, and they don't feel the need to ask if the civilian sitting in the passenger seat minds.  2) My German language skills kicked serious ass.  I really didn't know I could speak German.  I mean, my parents have been speaking German with me all my life, and I understand them perfectly and don't even notice whether they're speaking German or English, but I don't really speak it ever, and when I was a kid I was too self conscious and scared the speak it.  Stupid.  I fully rocked the German, man.  It did not help me find my mom's suitcase, but I still felt pretty good about myself.


The night we lost the suitcase, we stayed in a hotel somewhere in Germany, and while I was trying to sleep, I heard a bug buzzing around.  It sounded like an enormous bug.  I was envisioning those palmetto bugs in Florida that I have never seen, but I've heard they're the size of your fist.  So I'm looking around in the limited light of our hotel room, trying to see if I can see the huge bug in the room.  I see something up on the ceiling and I'm sure its the bug, and I start thinking, "Holy shit, that thing is going to eat my kid."  But then I concentrate a little more and it turns out that its the sprinkler.

I woke up in the morning and the bug was still flapping around the room.  Here it is: 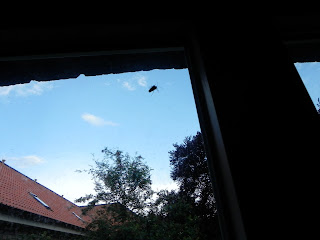 I don't know what kind of bug it is, but its about the size of my pinky nail rather than my meaty fist.  This little shit kept me up half the night fearing huge bug poos falling on my forehead.
Posted by Bored Housewife at 8:00 AM