After feeling a rush of love toward my home city after the fireworks show, I decided we should travel into the city again the following day to take in some sights and soak up the love.  We drove this time.  Fooled me once, Golden Gate Transit, shame on you.

We picked up one of Leila's friends and had a tourist day.  We went to Pier 39, the most touristy place in the whole city.  In fact, if you are reading this and have never been to San Francisco and are planning a trip here some time in your future, do not go to Pier 39.  SAVE YOURSELF!  Except for the magnificent views of the bay, and the sea lions that sun themselves in the bay, Pier 39 has absolutely nothing to do with San Francisco.  You will learn nothing about our city by going there, except that we will take your cash any way we can get it.  I hadn't been there in 20 years, so we went, and in spite of the touristy shlock, we actually had a good time.  Doesn't mean you should go there, though.

One of the really great things about my husband is that when I get a wild hair that we should do something like this, he doesn't cheap out on me.  He just knows that if we are going to the fair, or Pier 39, or some festival or public event, we are going to spend money, and that trying to save money during that kind of day is just annoying.  So we park in the garage, we go to lunch, we buy the kids some souvenirs (in this case, mood rings) we get some fudge, I even bought a sweatshirt because I've been wanting a zip up hoodie.  He doesn't balk, he just pays. (which is how I ended up with a $20 metal starfish.)  I like that about him.  When I was a kid, my parents might have taken me on an outing, once in a blue moon, but once there, I was never allowed to do any of the fun stuff like ride the double decker carousel, or tip the musician painted in silver, or get a funnel cake.  It was kind of a bummer.  But they also have a very comfortable retirement now, and that is a great gift to me, so maybe them buying me that ice cream cone would have meant me paying for their retirement home, so it was probably a good call. 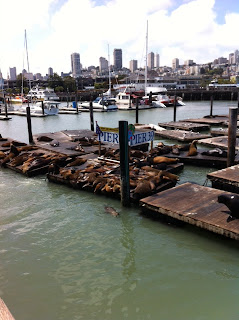 How about those sea lions, though?  That's a never ending drama, right there. "Get off my pier!  Stop pushing me!  You smell!  I'm trying to sleep!  I don't want your stupid Amway!"  At least that's how I translated there constant barking.  Those guys have a lot to say.

After the Pier, the kids wanted to go to the Hyatt Regency Hotel where they have these glass elevators that you can ride.  You're not supposed to ride them, and you can only get on if you have a key card, but we dangle around the elevator lobby for someone to get off the elevator and then we sneak on and go wild.  I used to love this hotel when I was a kid, too.  It must be genetic.  Also, Leila loves the name.  She says, "Its so fancy, like, Hyatt."  They had a ball.  They kept checking their mood rings which vacillated between being "calm" and "in love"  The latter made them blush.

Posted by Bored Housewife at 8:00 AM