What I did over my Memorial Day Weekend

Did you all have a nice memorial day weekend?  I sure did.  I laid around on my couch for two whole days.  I honestly can't tell you what I did.  Oh, yes I can, actually:  I made turkey meatloaf on Saturday, and I made vanilla ice cream on Sunday.  And the rest of the time I laid around and watched TV.

But here's what we did Sunday night, part awesome, part boondoggle. 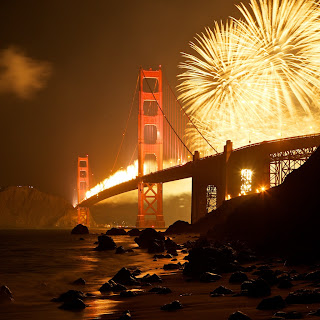 In an effort to get out of the house and do something great, we went to see our bridge celebrate her birthday.  We were told repeatedly, by every news source and every radio station, for days beforehand, USE PUBLIC TRANSIT.  So we did, rule followers that we are.  We went down to the bus stop with our exact change, and bussed it in to the city and got off on the SF side of the bridge and watched the most excellent fireworks show.  It was simply amazing, and I hate that word.  But you don't read me to see how amazing things were, you read me because little things piss me off and I like to make big deals out of them.

Which brings us to the boondoggle part:

After a fabulous and moving fireworks show (I do love that damn bridge) we and our fellow spectators made our way back up to the bus stop at the toll plaza of the bridge.  There were no buses.  There were no buses for a half hour.  Full buses drove past us, and we were completely bus free.  Let me also say here, that if you have ever been on the Golden Gate Bridge at 10 at night with fog rolling in, you know that its witches-tit cold out there.  And we can't stand in the relative comfort of the bus shelter because the 200 other people waiting for a bus are in a mass at the curb trying to be first in line for a warm bus.  So we wait.  There is one poor soul in an official yellow jacket frantically calling people on her cell phone telling them we need empty buses.  Finally, one bus arrives, and the first wave proceeds to board.  It takes 20 minutes to fill the bus, because it seems that every single passenger has never been on a bus before, and has to have a long discussion with the bus driver, presumably about correct change.  It is excruciating for the rest of us who are standing shoulder to shoulder freezing our asses off.  The one bus is filled, and we wait for a second bus.  We eventually boarded the third bus which arrived an hour and a half after the fireworks ended.
Mind you, I had a 10 year-old with me, and she was losing her shit.  I had to distract her by lending voices to the boarding passengers, like this: "Excuse me, sir?  Does this bus stop at the planet Neptune?  I don't have any dimes, so can you give me change back?  Oh you cant?  Well I don't have exact change, but I need to get to Neptune.  Will there be hot chocolate on the bus?  No?  I was told there would be refreshments..." and on and on.  This is where the real parenting chops come out.  I am cold and frustrated, and considering waking my dad and asking him to pick us up, but I am keeping my kid distracted from having a complete melt down by doing funny voices.  Someone give me a medal.

At 11:30, we got on the bus, and Rob and I had to stand the whole ride home.  I was burping the whole way, hoping I wouldn't barf, and, mercifully, I did not.  We were home and in bed just after midnight.  I'm still cold.

Good fireworks, though.  Gave me a great feeling of city pride.  I really do live in the most beautiful place in the world, and if you're reading this and don't live here, I feel sad for you.