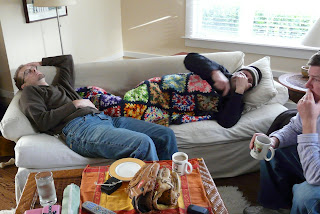 Yesterday we officially celebrated Rob's fortieth birthday. He wanted a bowling party, with some friends and their kids, and that's what he got. We bowled, we ate pizza, I got a deliciously sweet sheet cake from Ted at United Market, everybody had a perfectly nice time.
It was my suggestion that Rob grab a few buddies and go down to the local dive-bar (ours is called The Silver Peso, or just The Peso) and have some drinks and do some man-like things. I should also mention at this point that Rob's college roommate lovingly flew in from Ohio to surprise him. So Rob, Jeffery and Marc went to the Peso. This is where the wheels came right off the wagon. Marc didn't know how he would get home, and decided to just figure it out later. They played pool, had beers, and started with shots of rumplemans peppermint schnaps. I was home and in bed by 9:45, and at 12:30 the boys came home. Marc was shouting for me to make sandwiches or something (he was joking, he's a happy drunk) and as Jeffery went off to bed I heard him say, "I am getting way too old for this shit." Rob came to bed and seemed completely sober, didn't snore or get up in the wee hours, reaching for the aspirin.
Then morning came.
I was awake, but I didn't want to stir and wake up the sleeping giants. By and by, I heard Jeffery get up and Marc mutter something, so I got up, put on my robe and went out to survey the damage.
Jeffery looked like someone tried to tie his face into a pony tail. He was all scrunched up and red and puffy, sitting in our big green chair. Marc was an even prettier sight. He had crashed on the sofa, and Rob, ever the gracious host, had given him the dogs blanket off the floor to sleep under, and the poor guy was laying there in his hat and his jacket, freezing, since Rob had also, out of habit, turned the heat down on his way to bed. I went back to the bedroom and asked Rob if he wanted to suffer with his friends, and he came out, looking not-too-bad actually, and perched next to Marc's feet on the sofa. Marc didn't seem to be able to move, so Rob just had to cozy in there. I started to make them a pot of coffee and some toast, and Rob suddenly shot up and ran to the bathroom where he "launched" as Marc so eloquently put it. He came back and had some alka selzer (I wonder if Rob is the only person who still takes alka selzer, but he swears by it) and horked that up too. We were all laughing at him, poor guy. He has had to hold my hair back so many times (not from drinking, but from morning sickness) as I puked my guts out, and would just rub my back and say soothing things, but when he pukes, he's on his own. The best I can do is shout, "Are you okay?" from a few rooms over.
Jeffery and I went to get Marc a sausage McMuffin with egg in the next town over, and then went to the 7-11 next door to get tomato juice for bloody marys . He was amazed that our 7-11 sells organic milk; that's California, for you. We got home, Marc's wife was on the way to pick him up, Rob booted again, and Jeffery made bloody marys. Marc's eyes were still glistening when he finally got up, and I think he was still drunk. His wife took one look at him, while their three kids were whooping it up in the back seat, and said, "Well, you're going to be no use to me today." I had to call later to see if Marc had any idea why the sofa cushions that were thrown behind the sofa were all wet. Turns out it had nothing to do with him, but it was fun messing with him, trying to see if he happened to remember peeing on them or anything.
They were a pitiful mess, and normally, I would not think it was funny, and I would not make them coffee or get them McDonalds. I would be the type of wife who would make Rob get up and mow the lawn or something. But this was a special occasion, my man's fortieth birthday, and its a good idea for them to be reminded that they aren't twenty anymore, and they're "getting too old for this shit."
Now Rob and Jeffery are at the batting cages, doing more man things, and I have a third of a sheet cake left over, and it is calling to me, seductively. I just keep a fork in the cake box and eat big forkfulls whenever I walk by.
Happy Birthday, honey! Hope you remember it!
Posted by Bored Housewife at 4:13 PM