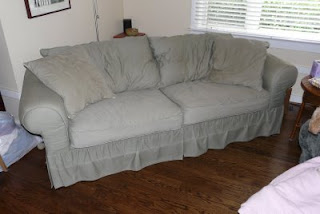 I'm sad about my sofa. Its really stupid, actually, but I am. There are some other things to be sad about right now, like the one-year anniversary of my father-in-law's passing, the fact that I went to the gym and did six whole minutes on the eliptical and I still can't go down stairs properly, but I'm choosing to focus on the sofa.
We bought our sofa before we closed on our house. We were at Busvan's for bargains, which no longer exists, another thing to be sad about, and we found what we thought was the perfect sofa: it was long enough for us to stretch out a take a nap, it was not too firm, not too soft, it looked kind of like a Pottery Barn sofa, with its rolled arms and skirted feet, and it came in green. It was $900. It was the second thing Rob and I ever bought together, besides, you know, the house. The first thing we bought together was... a sofa. Actually, a futon couch. Now we were moving from our small apartment into a small house, and the futon would be relegated to the guest room, an entirely thrilling idea in itself. I didn't want to buy the new, beautiful sofa; I thought we should wait until we were actually in the house and could take measurements and do all the little anal things I liked to do in preparation for a large purchase. So, we were at an impasse, and the way we settled it was the same way we settled almost any point of disagreement: with rock-paper-scissors. I lost, and we bought the sofa, on credit.
Turns out that Rob had totally figured out my rock-paper-scissors pattern. Apparently, I often started with rock, and if it was a tie, I would do the same thing the second time. So I started with rock, we tied, then I did rock again, and knowing that's what I would do, Rob did paper. I don't think this is fair. Now I change things up so I have a fighting chance at winning.
The sofa was delivered after we moved into our house, in the right color green, but the side cushions, which were supposed to be a lighter shade of green, were the same green as the rest of the sofa. It didn't really matter, and wasn't worth making a stink about. We had our sofa. We also were cat sitting for my brother-in-law's two cats while his house was being renovated. One of the cats hardly came out of the closet for the whole three months she was here, but the other one promptly scratched up one of the arms. Cat one, sofa zero. Rob and I ate dinner sitting on that couch way more often than we ate at the kitchen table. We took delicious naps on it, and later, when we got our own cats, they put their marks on it as well. I nursed my baby on that couch, watch endless hours of television on that couch, and fooled around on that couch.
The couch is now 12 years old, and the edges are worn, and the cushions have faded, and there are stains and stuff, but it is no longer my problem.
On Sunday, I sold the couch on Craigslist for $55. She's gone. Off to a second life. Someone else will drool on her during naps now. I'm sure its a good home, I feel good to not have put her in a land fill and to have given a girl just starting out a sofa with a few good years in her for a reasonable price. We got a hand-me-down couch from my mother-in-law. Its only 5 years old, and has its own stains, but its in better shape than our old one. It looks similar, actually, but its not the same. The back cushions are too thick to take a good happy nappy, but if you take them off, its alright.
I know its stupid to be melancholy over a couch, especially an old couch, especially when Busvan's is gone, and the economy has gone straight to hell, and people are starving, but I am. Its not like I had to get rid of my dog, or anything. I felt this way when I donated my piece-of-shit car to the public television station. The wiper fluid was running out from the back windshield as the car rolled away on the tow truck and it looked like it was crying. I am $55 richer, but I don't feel that great about it.
So, goodbye, old couch. You were a good couch. A loyal couch. A somewhat disgusting couch, but a comfortable one. I'll miss you. There may be other couches in my life, but you were my first, if you don't count the futon.
Now I have to go see if my pork loin registers 138 degrees on the meat thermometer. Life goes on, for me, and for my couch.
Posted by Bored Housewife at 5:18 PM

Ooh! Those are awesome! Spacify offers Sofa Couch and more at reasonable prices.