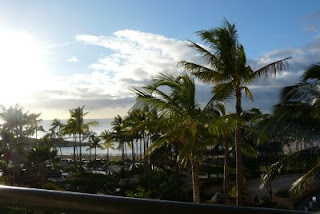 There is nothing on TV in Hawaii. You will not convince me that people who live in Hawaii don't want to see reruns of The Office on TBS. And don't they get a little upset that the timing of the programming is all messed up? I mean, shows are advertised as "8 eastern, 7 central" and we on the pacific are left to assume that our show is at 8 too, but the people in Hawaii are left to figure it out all on their own. When the hell is prime time in Hawaii?
Did you expect more of me? I'm in Hawaii, bitching and moaning about what's on TV. That's right, I've had a long day of beach sitting, and mai tai drinking, and snacking on Maui style potato chips, and all that really takes it out of a person. At the end of a long day like this, I just want to watch some TV. My mom wants us to play cards, but I don't want to play a game, I just want to veg' in front of the TV. So, its 8:45, and she sees that no one wants to play a game, so she says, "Well, I don't want to watch TV, so I'm going to bed." She's not pouting about it or anything, but somehow you feel guilty that you didn't jab your dad in the ribs and whisper "Play a goddam game with the woman."
My dad, for his part, can't understand why Rob and I aren't running out to go see the Arizona memorial. Now, honestly, I'd like to see it. I watched that whole world war II documentary, every horrifying minute of it, and I'd really like to see the Arizona memorial: some day. For now, I'd like to read my book on the beach. I feel guilty about this, too. I feel like he would be so pleased if we went to the memorial. He's been already, I don't think he wants to go again, but he thinks we should go, and moreover, he thinks we should really want to go. The weather was not that great today, and if its not that great tomorrow, we'll go.
Also, my dad, who I love, completely ignores my basic rules of parenting. I look at Leila, I can see that she is tired, and tell her its time for bed, and here's my dad: " She's on vacation, too! Let her stay up!" On the way back from a walk to see some hammerhead sharks and sting rays, right before lunch, he offered her an ice cream, and she chose a shaved ice instead. This thing was bigger than her head, and while we were all eating lunch, she ate the enormous snow cone. And Maui style potato chips.
Tonight, Leila put on a show for us of her "kung fu moves" as she calls them. She basically flails around in time with a "fast song" and punches her arms and legs all over the place. My daughter has great rhythmic timing, and a nice voice, and can pick out tunes on a piano, but she cannot dance. She dances like Elaine in Seinfeld, I swear. Anyway, we all applauded when she finished, and when she went to bed she said, "If anyone wants to see that show another way, I can do it in slow motion. I'm up for it any time." Does it get much cuter? I don't know how she has the energy for kung fu, only eating frozen waffles and chips.
Seriously, though, Hawaii is great. I love to get all prickly hot in the sun, dip into the pool to cool off, and then get prickly hot in the sun again. My favorite thing, is to do all this, and then order a mai tai from the roving waiter. I wouldn't mind staying down at the pool and ordering l lunch from time to time, but I feel like my mom is silently cataloging everything I put in my mouth, and every dime I spend, so I only order stuff when she's not around. Going on vacation with the parents is wonderful, priceless time, but also challenging to navigate. Totally worth it, though. Aloha!
Posted by Bored Housewife at 11:53 PM