I wish, for the sake of your entertainment, I could tell you all kinds of funny stuff about it, like all the funny things she assumed, or how grossed out she was, but it was too straight forward for that. Here's how it went:

She got in bed with me in the morning, and I seized my opportunity. I did my whole intro, about the Barbie Sex thing, and how I thought she should know some stuff before she ran into any more smut on the internet. I didn't use the word 'smut', but I did use the word 'boner', which I'll get to in a minute. I asked her to tell me what she already knew about sex, and at first she said, "Nothing." but then she followed that up with, "But I've heard that its when grown ups rub their parts together." Not far off. So I laid out the basics. I started with describing the male anatomy, and then describing what an erection was. I told her people call it a 'boner' sometimes (or, all the time, if you're me. Erection sounds like we're building skyscrapers.) She thought boners were "weird" and I tried not to agree, wanting to make it sound like all of this was beautiful and natural even though we all know the truth. I told her where the men put their boners and why, and she was fine with that. She was either fine, or a little traumatized. It was hard to tell. I told her that's how babies were made, and covered the sperm and egg gestalt which she found interesting, but then I told her that, most of the time, adults have sex because its fun.

I then wanted to move into a discussion about what she might see on TV and the internet, and what 'sexy' means and whatever, but on the way I got lost and started talking about arctic penguins. I think I was trying to convey that sex was natural and the urge to do it was universal, and in that moment I thought penguins were the perfect example. I got back on track, though, and I can proudly say that my daughter now knows that nothing she sees on the internet or on the TV about sex is real, and that no one is allowed to touch her body, and that she should feel free to come to me with any questions.

"So, do you have any questions?"

And that was that. Whew.

Oh! Then! I told her I had bought a book for her and she was all, "I DO NOT want to look at it... Well, okay, I'll look at it." She flipped through it, and was horrified by this picture: 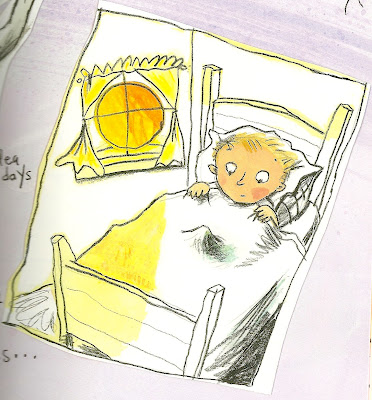 and said again that it was just weird. I refrained from comment.

And then we moved on to something else, or had breakfast or whatever we did, I don't remember because I was kind of buzzed on what had just happened. We have not revisited the subject. Why doesn't she have any questions? Is it because she really isn't curious, or that she just doesn't want to ask me? My Cool Mom systems have been activated! I'm ready to answer questions!!

So if you have any questions about sex, please let me know.
Posted by Bored Housewife at 5:11 PM