Last week was L's spring break and I decided to take a breather from my usual mode of planning absolutely nothing and letting her stay in pajamas all week, and put some fun stuff on the calendar.  She went to the zoo, roller skating, and then we took our annual day trip up to the snow.

Normally, Rob comes along and does the driving and takes over on the slopes when my knees give out, but this time he had to work, so my friend, E, said she would drive and we would all go together; me, L, E, and E's son.

The kids were all dialed in in the back seat.  Playing games on their devices, then watching movies on the DVD player and they hardly noticed when around two thirds of the way there it started snowing.  We were aware of the possibility, but you know how those meteorologists are liars and just make things up to torture me, like telling me its going to be 80 when its really 95, and telling me there's a 30% chance of rain when the sun is out.  50% chance of snow showers usually means, "Clear skies!  Have a great day skiing!" but this time it actually snowed.

The kids thought this was awesome.  They'd never seen snow falling from the sky before, just piles of it on the ground when their parents had respected the weather report and driven up there under blue skies.  But E and I are California girls.  In spite of her Ford Explorer, we were nervous about driving in snow, having to put on chains, or getting snowed in up there.  To the more experience snow person, this was probably nothing to get in a dither about, but we were going 40 and white knuckling it.

Long story short, we didn't ski or tube, but we did let the kids play in the snow between the lodge and the parking lot for an hour, and then we drove home.  We left at 8 in the morning, were home by 4:30, and had a delicious lunch at Denny's.  Then the kids played Wii for the rest of the afternoon because 7 hours of games and movies in the car wasn't enough.

I still had fun, though.  E and I had a nice long chat, and my burger was good.  And I crossed Wednesday off the spring break list.


Snow angels in the parking lot 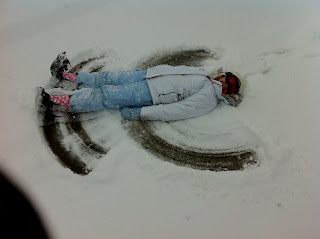 our view of the kids from the lodge.  Awesome parenting... 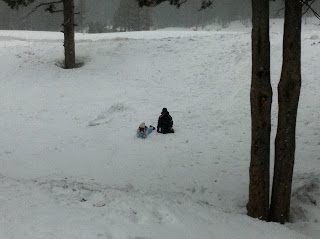 Posted by Bored Housewife at 8:20 AM