So check this out, this is amazing:

Saturday night, we took Leila to her first rock concert, Brandi Carlile.  It was Rob's idea.  Since Leila knows all the words to her songs, and the show would be over by 10:30 he figured she could make it through without crashing too hard and ruining it for everybody.

There are a pair of twin guys in this band, and they often dress like this: 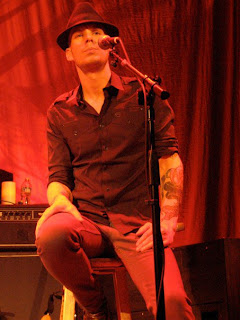 You've got the skinny jeans, button down shirt, and little hat, and often converse sneakers on the feet.  We thought it would be fun for Leila to dress up like this since she has all the ingredients, so she looked like this: 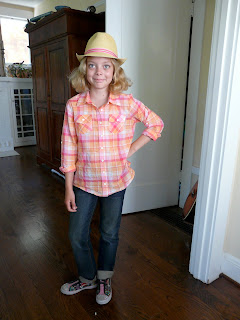 Before we went to the show, Leila spent some time in her room making this sign: 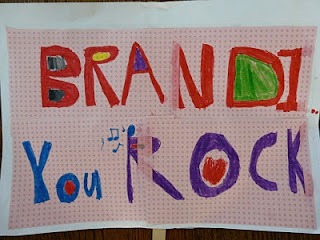 Our seats at the show had a fine view but there was a space, like a little walkway, where we could be a little closer and stand and dance.  Leila really wanted Brandi to see her sign, so the closer the better.  So we were singin' and dancin' and Leila was energetically waving her sign during the applause, and I downloaded a flick-your-bic app on my iTouch so I could hold a lighter up during the torch songs, and then this lady with a badge came over to us and I thought, oh, we'll have to go back to our seats now...

But no.  Instead she says, The management of the venue has been watching your daughter and thinks that she is totally cute. We're wondering, if you have time after the show, if she'd like to come backstage and meet the band.

Yes, you read that right.  I almost peed myself.

So we say, uh, YEAH! and the Badge-Lady goes on to say that she can't promise anything because sometimes the band has to leave right after the show, etc. etc. but she'll come back later and let us know.

Can you believe that shit?  It just occurred to me that it would have been way creepy if we had taken her to, like, a Rolling Stones concert or something and the same thing had happened: They think your daughter's cute and want to meet her backstage. But Brandi is a harmless lesbian, so I figure its fine, right?

Anyway, later in the show, Badge-Lady actually does come back and tells us to go down to the right of the stage during the last song or two and ask for Debbie.  Debbie is the overseer of all things, and she will know if we can go back and impress the band with our cute kid.  So we do as we're told, and we're stopped by a security guy, but I drop Debbie's name and he lets us down right near the right of the stage and tells us to wait.  He goes and talks to Debbie, and - alas and alack - should couldn't let us back stage.  We were, however, able to watch the rest of the show from up front, and Leila shook her little sign, and I'm sure the band saw her, and I bet they're still talking about the cute little blonde girl in the little hat.

I tried to decide how pushy I should be.  I'm not a very pushy person - I know, shocking - and I'm wondering now if I should have just strolled down to Debbie (who was standing five feet in front of me in all her power and over-lordness) and just pushed a little bit.  That's what my mom would have done.  She doesn't take no for an answer unless that answer is delivered by a police officer with a gun in her face.  My guess is she would not have been able to withstand the cuteness, and would have let us back there.  Where, upon being in the presence of greatness, I would have completely geeked out and guffawed and fallen all over myself.  I once met Shawn Colvin, another one of my favorite performers, and I just totally embarrassed myself.  I'm sure it wasn't memorable for her, but I still blush when I think about it.  But we'll never know now, will we, because I am such a complete wuss.

Turns out, Leila was very happy not to be forced to meet the great Brandi Carlile.  She said she was too tired.  Can you imagine?  Someone says to you, Hey!  Wanna once-in-a-lifetime opportunity to shake hands with one of your idols?  And you go, Nah, too tired.

It seems like some of my best stories end like this.  Like the time I ALMOST picked up Sean Penn hitchhiking when his car was broken down on the side of the freeway, but we couldn't change lanes fast enough even though we endangered our very lives trying.  He would have had to get in the backseat with Leila (she was a toddler) and what a great story that would have made!  Then there was the time that my mom called me and said her friend had two tickets to see Celine Dion in Vegas that very night and did I want to bolt out to the airport and go?  Of course I wanted to go!  Not that I was dying to see Celine Dion, but what a great story it would make!  I really just wanted to leave that message on my husband's work voicemail: Pick up Leila from the neighbor's when you get home, I had to go to Vegas.  My mom decided it would be too expensive and dropped the idea.  Damn.

So there you go, and ALMOST really great story, but as it is, a pretty good one.
Posted by Bored Housewife at 11:45 AM

It's STILL a great story and what an adorable kid you have!!