So here's the nice thing Rob did for me.

I have been opining for years about the roundness of lip balm.  There are few things more annoying than your burt's bees lip balm rolling off your night stand and under your bed, especially when you are already snug in your bed and you have to lean over the side of the bed and sift through all the under-bed dust bunnies with your hands to find your lip balm because your lips are just so dry and they're getting dryer by the second because your lip balm is out of reach.  My million dollar idea was to make lip balms in triangular shapes so they can't roll.  Rather than twisting them up, you would push them up.  I've been kvetching about this for years.  I know I'm far too lazy to actually make something like that happen, but why is no one else thinking of this?  Its an outrage.

So Rob texts me from work: 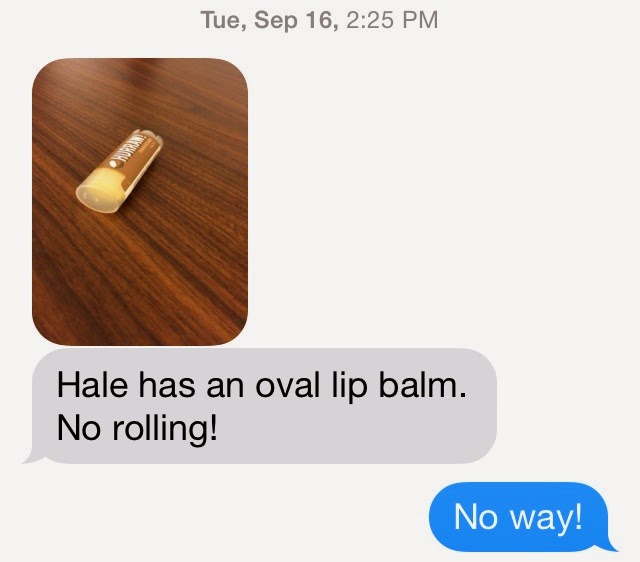 Someone solved my problem, with an oblong rather than a triangle, but still!  Genius!
Somehow, my desire for a non rolling lip balm did not send me out of the house immediately to go buy one.  Law and Order must have been on.

The next day, I get a call from Rob who had walked half a mile on his lunch hour to buy me this lip balm.  He called me to review the flavors and bought me two of them: Vanilla camomile for bed time, and grapefruit for morning time.  Wasn't that nice of him?  The company that makes it is called Hurraw, in case you're like me and hate rolling lip balms. And don't start telling me about the Eos lip balm; I'm not interested.  Lip balms should be long and thin, not spherical.  That's just wrong.

So, except that Law and Order is never on when I want it to be, I have nothing left to complain about.

(just kidding.  I can always find something to complain about)
Posted by Bored Housewife at 9:30 AM

Hi,
I love your blogs. I hope you keep on writing, I am also a bored housewife and your writing makes me smile.... a lot!
Viviana