My Kitty is sick.  I wont bore you with all the details, but suffice it to say that his kidneys are failing and he's not long for this world.  Rob and I are actually giving him sub cutaneous fluids, with a needle and an IV pole and everything, which is something I thought I would never do for one of my animals.  It wont cure him, but it will make him comfortable enough until its his time to go.

Surprisingly, my daughter was completely undone by this news.  She sobbed that she wasn't ready for him to go, which is kind of weird because he hardly lets her touch him.  Neither one of my cats give two shits about my kid, and the most they do is tolerate her, and maybe - MAYBE - sit on her lap while she watches TV, as long as there is a blanket between them.

I have been as stoic as I expected to be at a time like this.  I'm sure it will get worse, and then he will be gone, and we'll all be sad.  He is a very good boy, very skiddish, but sweet, and not nearly as much trouble as the big, black cat, who, while two years older than Sam, is healthy as a horse.

So, every other night, I hold him on my lap while Rob slips the needle between his shoulder blades and the fluid drips in.  The hardest part for him seems to be sitting on my lap for five whole minutes.  He'll sit perched on my hip all night long, but being held on my lap is his version of hell.

He's doing okay, and for all I know we could be giving him these fluids for the next year or so.  I'll let you know.  In the meantime, I'll clean up his occasional barf with a little less annoyance than I did before... 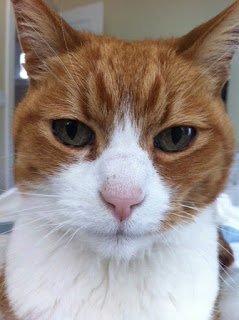 Posted by Bored Housewife at 8:30 AM